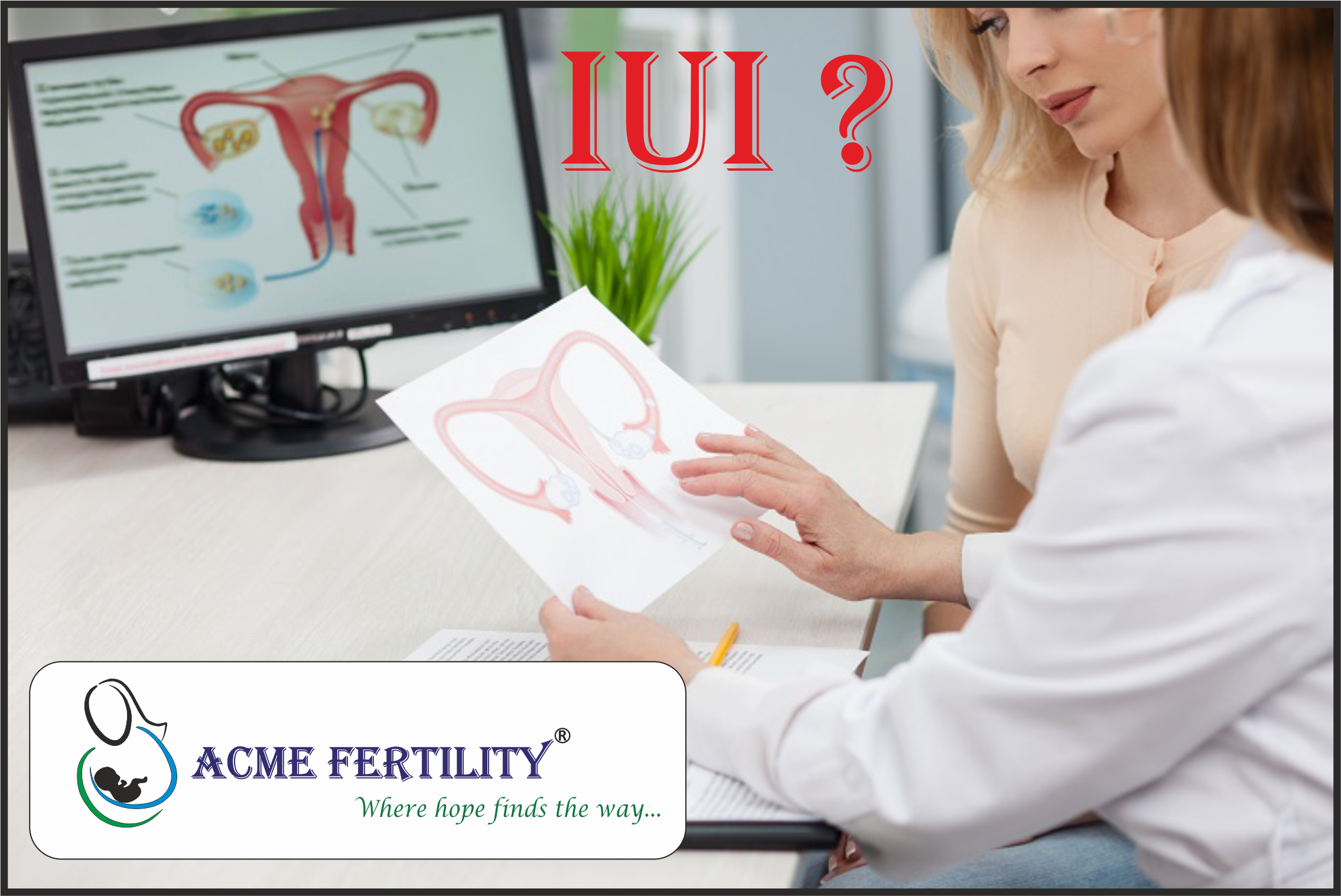 Intrauterine insemination or IUI, as commonly known, can be considered as the first line of treatment for infertility. IUI can be useful for both male and/or female factor related infertility. The first reported case of artificial insemination by donor occurred in 1884. The sperm bank was developed in Iowa starting in the 1920s in research conducted by University of Iowa medical school researchers Jerome Sherman and Raymond Bunge.

In the 1980s, direct intraperitoneal insemination (DIPI) was occasionally used, where doctors injected sperm into the lower abdomen through a surgical hole or incision, with the intention of letting them find the oocyte at the ovary or after entering the genital tract through the ostium of the fallopian tube

A. Indications for IUI

For male –
1. Oligoasthenoteratozoospermia i.e. men with low sperm count, or less motile sperm in the ejaculate, or having many abnormal sperm. In our experience we have found that if the total motile sperm concentration after sperm wash is less than 5 million then the success rate is less.
2. Sexual or ejaculatory dysfunction where semen is collected using vibrator or through electro ejaculation.
3. Retrograde ejaculation, where semen enters the bladder after orgasm, instead of ejaculating out through penis.
4. Immunological factors like autoantibodies and sperm agglutination.
5. Men with highly viscous semen for prolong time, which restricts sperm movement deposited in the cervix under natural circumstances.
6. Donor sperm insemination
For female –
1. Anatomical defects of the reproductive tract, where direct coitus is not possible
2. Psychological sexual dysfunction – dysparuenia, vaginismus.
3. Cervical factors i.e. poor sperm-mucus interaction, failed post-coital test, antisperm antibodies.
4. Ovulatory dysfunction
5. Unexplained infertility
6. Minimal endometriosis

It has been universally observed that whenever IUI is combined with induction of ovulation or controlled ovarian stimulation, the success rate in the form of pregnancy is improved. Depositing actively motile sperm free from debris, leucocytes, pus cells, and dead sperm has a significant reproductive advantage in fertilizing the released oocyte from the ovary, in the fallopian tube. During natural intercourse, semen is deposited in the vagina, motile sperm from the semen move towards fallopian tube. Out of around 100 million sperm from a ‘normal’ man deposited in the vagina, only about 1 million sperm find their way to the upper portion of the uterine cavity and only few hundred enter the tube where fertilization occurs. In IUI, 5-10 million motile sperm are deposited at the top of the uterine cavity near the opening of the tubes thus significantly increasing the chances of healthy sperm reaching the mature oocyte.

The risk of infection with IUI is very small.

A woman’s menstrual cycle is closely observed, by tracking basal body temperature and changes in vaginal mucus, or using ovulation kits, ultrasounds or blood tests. When using intrauterine insemination (IUI), the sperm must have been “washed” in a laboratory and concentrated and warmed to 37C. The process of “washing” the sperm increases the chances of fertilization and removes any mucus and non-motile sperm in the semen. Pre and post concentration of motile sperm is counted.

If sperm is provided by a private donor, either directly or through a sperm agency, it is usually supplied fresh, not frozen, and it will not be quarantined. Donor sperm provided in this way may be given directly to the recipient woman or her partner, or it may be transported in specially insulated containers.

When an ovum is released, semen provided by the woman’s male partner, or by a sperm donor, is introduced into the woman’s vagina or uterus. The semen may be fresh or it may be frozen semen which has been thawed.

A method of artificial insemination is to insert semen directly into the woman’s uterus. Where this method is employed it is important that only ‘washed’ semen be used and this is inserted into the uterus by means of a catheter. ‘Washed’ semen is used to eliminate the risk of cramping. Semen is occasionally inserted twice within a ‘treatment cycle’.

A pregnancy resulting from artificial insemination will be no different from a pregnancy achieved by sexual intercourse. However, there may be a slight increased likelihood of multiple births if drugs are used by the woman for a ‘stimulated’ cycle. To have optimal chances with IUI, the female should be under 30 years of age, and the man should have a TMS of more than 5 million per ml. In practice, donor sperm will satisfy these criteria. A promising cycle is one that offers two follicles measuring more than 16 mm, and estrogen of more than 500 pg/mL on the day of HCG administration. A short period of ejaculatory abstinence before intrauterine insemination is associated with higher pregnancy rates.

Intracervical insemination (ICI) is the easiest way to inseminate. This involves the deposit of raw fresh or frozen semen (which has been thawed) and which has been provided by the woman’s partner into the cervix usually by injecting it with a needleless syringe. Where fresh semen is used this must be allowed to liquefy before inserting it.

The syringe should be inserted carefully so that the tip is as close to the entrance to the cervix as possible. The woman should be comfortable at all times. A vaginal speculum may be used to hold open the vagina so that the cervix may be observed and the syringe inserted more accurately through the open speculum. The plunger is then pushed forward and the semen in the syringe is emptied into the vagina. The syringe (and speculum if used) may be left in place for several minutes and the woman is advised to lie still for half-an-hour or so to assist fertilization.

Timing is critical as the window and opportunity for fertilization, is little more than 12 hours from the release of the ovum. For each woman who goes through this process be it AI (artificial insemination) or NI (natural insemination); to increase chances for success, an understanding of her rhythm or natural cycle is very important. Advanced technical (medical) procedures may be used to increase the chances of conception.

Success rates or pregnancy rates for artificial insemination may be very misleading, since many factors including the age and health of the recipient have to be included to give a meaningful answer, e.g. definition of success and calculation of the total population. For couples with unexplained infertility, unstimulated IUI is no more effective than natural means of conception.

The pregnancy rate also depends on the total sperm count, or, more specifically, the total motile sperm count (TMSC), used in a cycle. It increases with increasing TMSC, but only up to a certain count, when other factors become limiting to success. The summed pregnancy rate of two cycles using a TMSC of 5 million in each cycle is substantially higher than one single cycle using a TMSC of 10 million. However, although more cost-efficient, using a lower TMSC also increases the average time taken before getting pregnant.

ACME fertility is an advanced medical center with a team dedicated to providing the highest quality of health care. The aim of ACME fertility is to achieve the highest possible standards in all aspect of medical practice – a personalized, clinical approach that aims to minimize medical and surgical intervention, yet offers you the best treatments and option available.